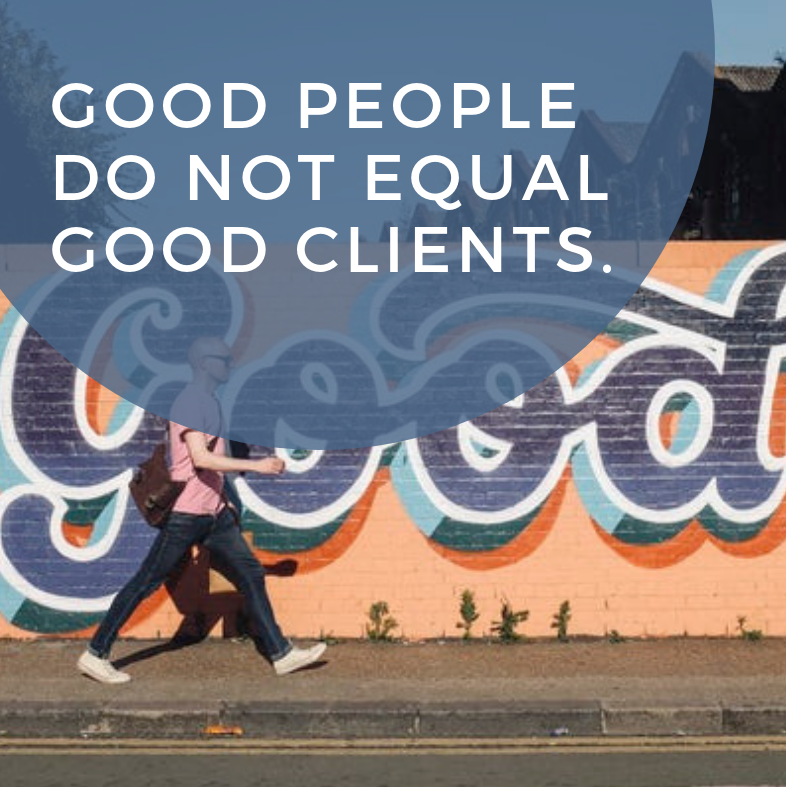 Early summer of 2018: The Idea, Inc. met with a company we had been dying to connect with and potentially work with. The company is women-owned and focuses on social responsibility businesses and nonprofits. They were our kind of women.

Fast forward to August 2018, we weren’t able to work together, but we had built up a business relationship and they recommended a local nonprofit to us for some design work for a book.*

*If we’ve said it once, we’ve said it a million times. Life is so much better when you have your people to support you, love you, and refer clients to your business!

We are working with two people from the non-profit: a project manager and a writer. We start designing the book in the agreed program, with the agreed style, and at the follow-up meeting to go over the introduction and first chapter, we’re told that they want to change the program from the agreed upon original to a different, free, less design-oriented program…

We are off to a rocky start, to say the least, but other things about the project and partnership are going well. For example, the promise of moving from project-to-project to a retainer-based client! Yay!

That’s sort of where it the good ends.

Thirty days later, project #1 was supposed to be finished, however, due to reasons outside of anyone’s control, we aren’t done until October 2018. Then begins the edits. Edit #1 came a week later. We finished them within 10 business days and then asked for the second round. Silence, not for lack of trying, for about a month. But we eventually get the changes and finish the project.

(This is where we, The Idea, Inc., made a mistake – I know, I know, we’re human too. In the initial contract, we stated the payment was to be sent within 7 days of project completion and when the project was taking longer, we should have amended the initial contract to a month-by-month payment plan. But we didn’t so we were paid for 4 months later, which was a teeny bit stressful, tbh.)

December 2018: Immediately after project #1 was done, we began onboarding for project #2. Looking back, we probably should not have taken on project #2, see above for reasons why, but we like the non-profit, the people we are working with, and they really do have a great mission and heart. And so project #2 took about .2 seconds to complete in comparison with the first and we officially ended the project towards the end of December. Project #2 went perfectly and there’s nothing else left to go wrong, right!? Wrong.

Over Christmas, we hear that the project manager is no longer with the company and we’re not to communicate with them from that point forward. Okay. Cool.

Then we find out, the writer is having major surgery at the beginning of January. No big deal, we’re flexible when it comes to extenuating circumstances and we wish them well. A week later, we follow-up. Surgery went well, they are going back to work the next week, and will release payment then.

It’s the second week of January 2019 and we hear no word for the writer, however, the project manager has mysteriously come back into the picture and asks for all of the invoices and payment receipts for the non-profit’s finance person. Okay, done. Sent.

The third week of January brings news that the writer has cancer – which is horrific – but will continue to work and specifically work with us. Also, they need all of the invoices and payment receipts for the CEO, so I forwarded the email that I had previously sent to the project manager to the writer, and cc’d all the people. Then, silence.

The fourth week of January 2019: I call the writer, the only person who seems to be able to answer messages, and ask for the financial person’s name, number, email. I call and the financial person reports that they printed and sent the check in the mail January 30. The writer goes into work the next day, calls me and confirms that it was sent out in the mail.

I repeat, two people confirmed that it had been sent with the postal officer and that the check was on it’s way to us.

Seven business days later, February 11, 2019: Ebonni has not gotten the check in the mail. I email the project manager, writer, and financial person to confirm that they have the address. The writer graciously forwards the email to the CEO letting them know that we haven’t gotten the check yet.

We still haven’t gotten paid. Pray for us. Specifically for Rebekah, because she is about to freak out.